Falling off the wagon and road trip food 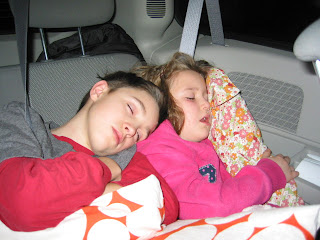 Many of you know that I have made some lifestyle changes upon moving to Baltimore. First, I try to exercise everyday. Secondly, I have been eating healthier, which translates into buying organic, limiting the sugar, smaller portion sizes and no late-night eating.  The results have been fabulous. One, my kids will eat what I make without the fight and struggle we once had (we're talking vegetables folks!) Another, not as important but certain as fun result, is a deficit of more than ten lbs. for me.
Then along comes Thanksgiving weekend... and a road trip to NYC and OH! If you do the math, that is roughly 24 hours in the car(over three days), with a major holiday centered around the dining room table in between. To make matters worse, the only exercise to be done is at rest stops, doing pushups on the pavement or flexing certain muscles while sitting in the car. Not those muscles! Come on people - that's what rest stops are for.   hehe  Actually, we did walk the streets of NYC for a day, which might be impressive if I fail to mention the bagels and cream cheese we had for breakfast These were NYC bagels, still warm. And this was not your ordinary cream cheese. This had fresh strawberries swirled in one batch and toasted walnuts in the other. Oh, I did go for a run on Thanksgiving day, only to have my little sister waste me. She's amazing, especially on those killer hills she introduced me to.  As to the food that road trips and vacations encourage, well... not the most nutritional stuff out there. We did buy bananas at a gas station, but we also bought the Doritos in the stand next to them. Okay, so we bought two bags. I'm not saying that we didn't pack healthy food for the trip, because we did. There is just something about "roadtripping" that makes you throw caution and common sense to the wind and eat in ways you never would at home.  Thanksgiving was full of delicious foods and desserts, much of I which I showed great restraint against, but if anyone knows me and pie.... well.... not so much restraint shown there. Needless to say, upon arriving home, I stayed clear of the scale.
If all that wasn't enough, we have spent the last two days in the rental car trying to find a car to buy. Yesterday wasn't too bad, six+ hours, but today was almost ten hours covering 4 states. Yuck! Why are we car shopping you ask?  More on that later.... Gotta go workout! :-)
Posted by Unknown at 8:14 PM

i seriously forgot how hilarious you are. Sounds like a fun trip though. Red vines are my fav for traveling because they don't make a mess and they are fat free. What could be better?

Yeah that you are blogging! I am excited to keep track of you guys this way! I'm so jealous that you got to go to NYC--we miss it so much! It is funny, I hear about your mom a lot now as Kathy Miner is in our ward now and she is one of my counselors in YW. Chris wants you to put a link to Juan's art blog on your blog so that he can find it. Love to you all!

Is this the Mishel I know? I can't tell from you teeny tiny pic and I can't imagine you living back East. Let me know. nancy ericson