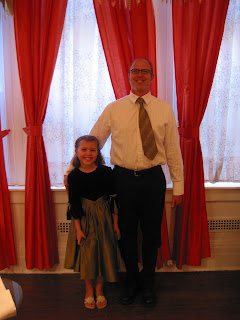 Jon doing his best to pose like he did in HS. Sis so excited she's about to jump out of her own skin.

Daddy-daughter dates are the best!

Jon took Sis to dinner and then dancing at the annual DDDance in our LDS stake here. They really go above and beyond. I've never seen anything like it. The cultural hall aka gymnasium was transformed. There was a disco ball hanging from the ceiling. The floor had been made to look like cobblestones. The tables were set in a round and in the center was dancing.  They had a violinist playing during dinner and dance instructors to help afterwards.  They even got their pictures taken (just like HS) to take home.

At one point while they were dancing Jon said Sis was looking at her feet, counting out the steps and he reminded her to look up at him and not her feet, like the instructor had told them. When she looked up, she was beaming! He said he had never seen her so lit up. It was an absolutely magical night.