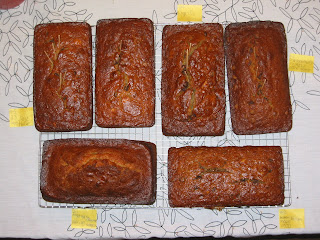 First, the freezer in my kitchen was overflowing with bananas. (I freeze them when they are fully to over-ripened and then thaw when I am ready for baking. You probably do the same thing, right?) Yesterday I took inventory of the banana population and it was out of control.  There were 16 hiding out in various nooks and crannies and I am convinced they were breeding. I simply don't remember putting that many in the freezer.

The other thing that spurred this throwdown was the recipe problem I have been battling for too long. I simply have too many recipes - good ones. The cookie selection is out of control too. Soups and salads galore! Crock-pot ideas, difficult to sift through them all. Don't get me started on sweet breads... They're on scraps of paper, torn out of magazines, covered in fallout from repeated use and generally a mess.

Yesterday the overflowing banana population combined with the cornucopia of recipes for which to turn them into bread was the final straw. I simply had to have a throwdown.

Here's the set up: five recipes with little to no alteration of the recipe - ok, so I added chocolate chips to all but one recipe as per Jon's request - and one evening. We judged on taste, texture, appearance and then rated it overall.

Let me look at my notes...
#1, Martha Stewart Baking Handbook

Probably a little overdone even though it was baked according to the directions. This one had coconut and pecans but no chocolate. It was the only one with coconut. It had a chewy texture that we liked. It was the only recipe where I toasted the nuts before adding them to the batter, as per the recipe. It made for a more noticeable flavor prompting everyone to give them a thumbs-up.

I like Alton's approach, mixing his baking knowledge with a slightly unique set of ingredients. This was the only recipe calling for almond extract.  In addition to all-purpose flour he also used oat flour (which I didn't have). My substitution - ww flour instead. This recipe produced a very moist product. Jon felt there was too much chocolate (as if that's possible). E and I really liked this one.

I got this cookbook as a wedding present. Honestly, the only recipe I have ever used from it is the banana bread recipe. I have used this recipe a lot though and have been pleased with the results in general. However, I felt like it was drier than #2, which I don't prefer. The flavor was unremarkable. Jon liked that it was drier as he wants to eat his with a mug of milk in tow.

#4, Kristens' recipe via Ingrid - (we just call it The Ingrid around here)

This resulted in a very moist loaf. Et liked that a lot. It wasn't as sweet as the others which I liked. There were no nuts, as per the recipe. It was the only one without nuts actually. I think adding them would really give it a boost. Jon felt it was a little boring in comparison to the others, but agreed the nuts would greatly improve it.

Another moist loaf. It made two full loaves which was more than the others. E liked the flavor of this one. I felt, in comparison, it was not quite as tasty or unique as some of the others. 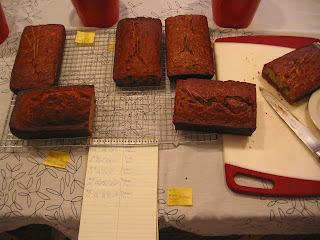 I finished too late last night to have the judging, so it went down this morning at the breakfast table. Poor family.


After tallying up the scores, we came to a tie decision. Drum roll please - da da da da da da da da!!
The winners: (#2) Alton's and (#4) The Ingrid. Both were very moist. E and I especially liked the almond extract component in #2. I liked that the #4 was not too heavy on the sweet factor. 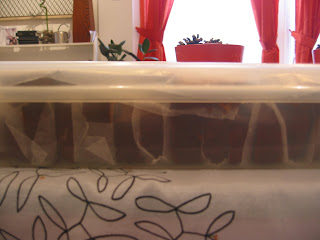 And to finish things off - I sliced the loaves, packed them into containers and sent them off to the freezer to be consumed at a later time. Don't worry, I left some slices out for the family to munch on now.

(#2) Alton's. (Someone else had already typed it in, so I just linked you to them.) This is the recipe straight from the book. Now do you see why I am smitten with Alton? I like that he gives it to you in weights and measurements. Two things: I disagree with the claim that these were better without the almond extract, but I am a sucker for the almond, so who knows... maybe they're right. Also, you absolutely DO NOT line your pan with wax paper. Parchment people! Parchment! They are not the same. Don't learn the hard way. Let me repeat - parchment.  Okay, whew! I agree with every thing else. I used pecans in my batch and I used my paddle attachment instead of a potato masher. About the bananas... My bananas have been a sorry sight scarier than the pictures they had and I think they are better that way. In my humble opinion, the darker they are, the sweeter they taste.

If you want the runner-up recipes, let me know. Oh, and the Old Fashioned Cookbook is already in the pile destined for the thrift store. One down, 10,000 to go. Oh well.

Woo-hoo! I have a wining recipe named after me! I don't take any credit, but it's fun anyhow. I love the very moist and banana-y flavor and also the ease of the recipe. Thanks for narrowing down the pile for us all! I will do this someday with some of mine and then you can reap the benefits! xo

Awesome! I don't mind being "the loser" as long as I'm in the running with this crowd! Ha Ha! And seriously... your bread posts have been making me so hungry. Yummy!
-Jessica
(And I'm totally making the "Ingrid" this week.)

Mishel! I love your blog, it makes me want to go home and bake and decorate my apartment with beautiful things. I'll be trying out some banana bread this weekend :) Rachael Crane

I am totally getting fatter and fatter just reading your blog. fun idea -- for sure.