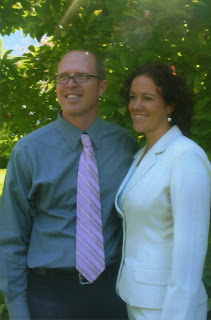 Taken at Jon's Graduation from BYU in '07
On Sunday Jon and I celebrated our 13th Anniversary! It was pretty chill. We played baseball with the kids in the park and finished the day with vanilla milkshakes and a movie.
Thing is, I can't figure out where thirteen years went. It just seems like a blink and not, if you know what I mean. We figured out that by the time we celebrate another thirteen, E will be 24 yrs. old and Sis will be 20!! Jon will have had his 50th birthday and I will have blown out 46 candles on my last cake. Then we will really be wondering where the time went. I am not going to get all sentimental here. I have saved that for my own personal journal, but suffice it to say, I am grateful for the life I have and for the last thirteen years with Jon. They have been beautiful and full. We have experienced so much. We've learned together, grown together and wanted to strangle each other at times. We've made a family together, run a business, finished school, restored a house, moved 2000 miles, had adventures and trials, laughed until our bellies ached and cried until our eyes were dry(okay that one is me). I had no idea life would be so much fun.
Jon gave me these drawings done by a classmate of his. I love Lawrence's work. I have wanted some of his art for awhile now and I was so happy to get these two.
The images are only 5"x5" with the paper being 7"x7". He paints with tea for the background and uses pencil for the illustration. Jon chose these two because they remind him of our kids. I would like to get a few more of his drawings before we leave school. They are wonderful. 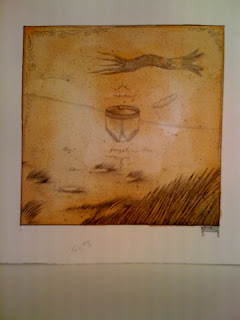 First, in honor of E. Its a long story, very funny, and totally embarrassing. Maybe I'll post the video. (As I write this, E is jumping up and down behind me, begging me not to post the video, as he feels it will show him as "an insane kid who liked to put underwear all over his body for fun".) Let me just say, he was 9 and he called himself Underpants Man. I can still hear him shout, "Underpants Man to the rescue!" like it was yesterday. I will say, all the underwear used in the filming was clean, albeit used.
This drawing holds another little piece of significance for me. As a kid, my mother always told us to wear clean underwear. I know, I know... Everyone's mother taught them to wear clean underwear, but her reason was very specific. If we were in accident and had to go to the hospital, imagine how mortified she would be as a parent to have her child caught wearing dirty underwear. I have never forgotten that. It still makes me smile to think of it. And the inscription on the drawing says never forget. Don't worry mom, I still remember. 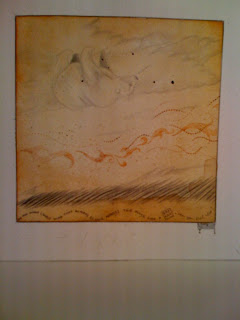 I didn't ask Jon what specifically he thought of with this one. The inscription across the bottom reads, Or the warm lonely wind that always blows across this place like a BOX FAN... Can you feel this? It's just lovely and carefree and a little bit magical. I know the pics don't do them justice. The detail is fantastic. I love how he uses tea as a watercolor. It's so warm, so organic, so simple.
Posted by Unknown at 12:00 PM

Happy anniversary! Ours is next week too! The time does fly! Kyler used to make us laugh also by putting every single pair of underwear on at the same time. so it must be a boy thing!

Happy anniversary. Y'all look fabulous in that picture!