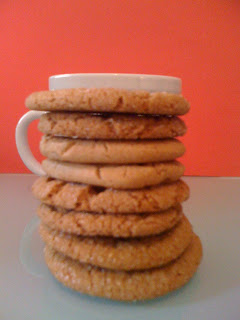 This was a tough one! I think because I love gingersnaps so much I expect more from this cookie. First the background... 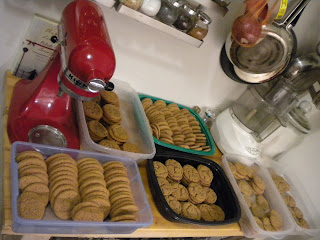 Six recipes. Three from cookbooks. Three from individuals. Finished product: 28 dozen cookies!
Let me introduce you to the contenders, in no particular order.

I'll tell you right now, I could not pick one. It came down to the final decision from everyone. Let me just say, I will be keeping more than one recipe.

Dough - This recipe was the only one to use fresh ginger. It resulted in a very strong ginger flavor. It was only one of two to use dark brown sugar as well. This recipe called for 1/4 t. black pepper which I thought gave it a nice kick. It needed chilling and I found the proposed cooking time to be far too long for my liking. I believe the intended result was a much crunchier cookie, but I prefer mine chewy, so I decreased it by almost half.

Cookie - Jon didn't like how the surface cracked but I thought it looked as a traditional gingersnap ought to; maybe a little on the flat side. It had a chewy consistency that we all liked. Jon didn't like the "hairs" from the fresh grated ginger. I didn't notice them. Far and away this cookie had the strongest ginger flavor of the bunch.

Dough - Crystalized ginger set this recipe apart from the others. It also needed overnight chilling and was done so rolled into logs and wrapped in wax paper. 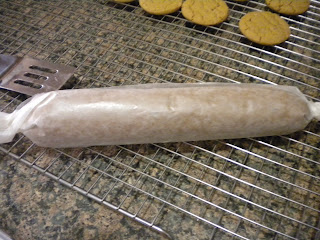 When it came time for baking this was the only cookie to forgo the traditional sugar coating and instead preferred to be sliced and left bare. 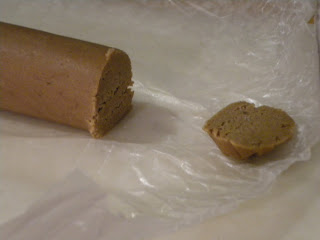 Cookie - The texture of this cookie was almost crunchy but still chewy; not dry. It had a strong ginger flavor. The color was paler than I usually like and due to the rolling there was a slightly flattened edge. The crystallized ginger chunks were a nice touch though.

I'll be honest and brief. These were everyone's least favorite. The dough was bland; the cookie too crunchy. It tasted less like a gingersnap than all the others. Unfortunately it also produced the largest batch. Finally on a positive note, it was a nice looking, consistently shaped and colored cookie.

Dough -  A tasty dough. Easy to work with. Needed no chilling. This was the only dough to use vegetable oil.

Cookie - The flavor was a very traditional gingersnap flavor. It had a very nice appearance and a perfectly chewy texture. The baking time was shorter than all the others by a minute or two per batch.

I have had these before from Adrienne and they tasted much better than I was able to produce. The dough was very sticky and soft, needed chilling and tricky to work with. The cookie was flat in both texture and flavor. I wish I knew how Adrienne achieved the results she achieved, but alas I do not.


Dough - This recipe produced a large batch. It was the only recipe to use butter and shortening and both white and brown sugar. Of note was the fact that traditional white sugar was replaced with turbando (raw sugar) for the rolling. I rolled larger balls than most of the other recipes and still came out with 6+ dozen cookies. 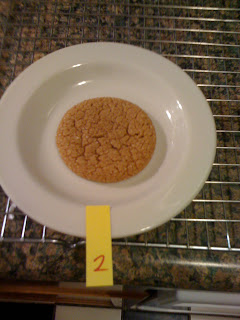 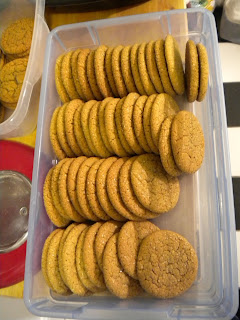 Cookie - A large, attractive cookie. It was extra chewy, but with an added crunch from the turbando coating. The taste, mellow. We all loved the raw sugar touch. 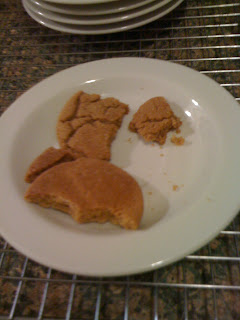 Final result? Let me explain...
We chose #2 (Alton's) as the overall winner based on its wonderful ginger flavor, the added texture from the crystalized ginger and the wonderful chewy consistency.  Even though it needed to be made ahead, I liked that the baking prep was so simplified. No rolling, just slice and bake. And no rolling means less sugar and less mess. I have given you two links to get this recipe. This is a great site. This one easier to read and print.
We also loved #6 (Bridget's). The taste was more mellow. The raw sugar was a fabulous addition. It too had a very pleasing chewy texture.
4 cups flour
1/2 tsp. salt
2 1/4 tsp. baking soda
2 tsp. ground ginger
1 1/4 tsp. cinnamon
1 1/4 tsp. cloves
1/2 cup butter
1/2 cup shortening
3/4 cup white sugar
3/4 cup brown sugar
2 large eggs
1/2 cup + 2 TBS molasses
1/4 cup raw sugar (I used closer to 1 cup.)
Preheat oven to 325 F. In a large bowl whisk flour through cloves. In another bowl with mixer, beat butter, shortening and sugars until light and fluffy. Beat in eggs one at a time and then molasses, mixing well.  Gradually beat in flour and combine well. Form large walnut sized balls and roll in sugar. Arrange balls 3" apart. Bake cookies for 13 minutes or until puffed and golden.(I baked for 11 minutes.) They should still be soft. Transfer to racks to cool.
In addition I personally liked the flavor of #1. The fresh ginger was so refreshing and intense.
2 cups all-purpose flour
2 teaspoons baking soda
3/4 teaspoon ground cinnamon
1/4 teaspoon ground cloves
1/4 teaspoon freshly ground pepper
1/2 teaspoon salt
1 1/2 sticks (3/4 cup) unsalted butter, room temperature
1 1/4 cups packed dark-brown sugar
1/4 cup unsulfured molasses
1 1/2 tablespoon finely grated, peeled ginger (one 3-inch piece)
1 large egg
1/4 cup granulated sugar

In a large bowl, whisk together the flour, baking soda, cinnamon, cloves, pepper, and salt; set aside.

In a large bowl, beat butter, brown sugar, molasses, and ginger on medium-high speed until light and fluffy. Beat in the egg until smooth and combined. Add flour mixture, and beat on low until just combined. Transfer dough to a bowl and wrap in plastic; refrigerate until well chilled, about 1 hour or overnight.

Bake for 15-18 minutes (I baked mine for 9-10 minutes so they would be chewier). Transfer cookies to a wire rack to cool completely. Cookies can be kept in an air-tight container at room temperature for up to 4 days.
So for my personal library I will be keeping #'s 1&2, as they are found in cookbooks I currently use. I will also be adding #6 to my personal library.
In my opinion, any gingersnap recipe would be made better with the addition of crystallized ginger and the exchange of white sugar (used in rolling) for raw. 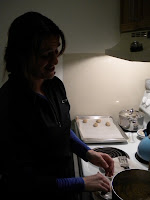 Wish I was there to do some "tasting" They look fabulous!

I am going to try the crystallized ginger and also the raw sugar-- thanks for the tips and all the hard work!